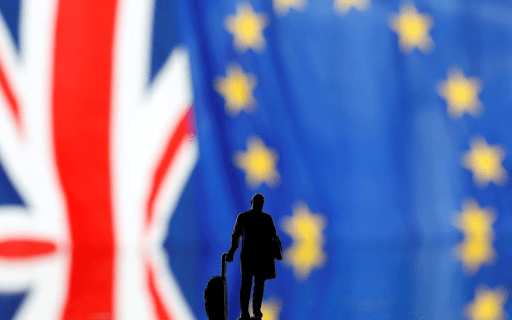 Following its legal withdrawal from the EU on 31 January, the UK is currently in the so-called transition phase where the country continues to abide by most of the EU bloc’s rules while a trade deal is negotiated.

It is time for British companies and European citizens who live and work in the UK to get ready for the upcoming changes.

What should EU citizens do in order to stay in the UK after the transition phase?

The UK government has promised to guarantee the rights of every EU citizen already living and working in the UK.

While they have the right to remain during the transition period, they must apply for a new legal status (settled and pre-settled status). They are required to apply to the UK Home Office’s EU Settlement Scheme (EUSS) in order to retain their residence rights.

However, despite government efforts to make this programme more accessible, there likely is to be challenges for some groups of people.

How to identify your respective status?

Your EU citizen status depends on how much time you’ve lived in the UK.

If you can prove that you’ve lived in the UK for 5 years and more you should either apply to the EUSS for settled status or for British citizenship. You’ll have more rights if you become a British citizen but you might have to give up your current nationality.

What are your respective rights based on your status?

The regulation of your status may give you the right to stay in the UK for more than 3 months, work, study, use the NHS, claim the State Pension, or rent a home.

However, some of these rights may vary depending on your status.

If you get settled status you have the right to spend up to 5 years in a row outside the UK without losing your status.

Remember! You must arrive in the UK by 31 December 2020 to be eligible!

From 2021 a new immigration system will apply and EU citizens moving to work in the UK will need to get a skilled worker visa and prove they already have a job offer from an approved employer sponsor. Thereby in order to sponsor and hire skilled European migrants your company must get prepared before January 2021.

As a British employer you should consider applying for a sponsor licence which will be valid for 4 years. Most applications are dealt with in less than 8 weeks.

In the interest of your business it’s best to encourage your European employees to anticipate a need for a residence and work permit, this as a means of avoiding finding themselves unable to work and reside legally at the end of the transition period.

However, today a number of companies are announcing that they will repatriate production to France to deal with management difficulties relating to subcontractors in the UK. The British companies consider this transition period as an opportunity for them to transfer their business to a European country.

What is the reality of making an EUSS application during the pandemic?

First of all, we need to mention that EU citizens currently stranded abroad due to lockdown measures around the world. As travel remains disrupted, EU citizens risk breaking the required continuous residency in the UK. Continuous residency usually means no more than six months of absences in any 12-month period.

So it is important that the UK take steps to minimise the consequences of the lockdown for people whose absence has been extended as a result of quarantine.

Therefore the UK-EU Withdrawal Agreement does allow to apply to the EUSS scheme six months after the end of the transition period in certain circumstances, upon proof that they lived in the UK prior to 31st December 2020. We can expect the British government to specify that difficulties in submitting a timely application would be regarded as a good reason for having failed to respect the deadline, and to allow a late application.

How can British citizens living in the EU keep their residence rights after Brexit?

The Withdrawal Agreement, which became effective on 1 February 2020, says that British citizens who are lawfully resident in EU member states before 1 January 2021 will be able to continue to live, work and travel (although these rights would cease after a leave of absence of more than five years). British citizens will have until 30 June 2021 to apply for residence status.

It is the responsibility of each member state to set up a settlement scheme to register British residents.

Example of a French settlement scheme

During one year from the Brexit date, you as a British citizen will keep most of the rights you had as an EU citizen. This means you will be able to continue to reside in the territory of France, to work, to look for a job, or to study.

After this grace period of one year, British citizens living in France will have 6 months to get a “withdrawal agreement” residence permit as of 1 July 2021.

If you have resided in France for more than 5 years you will need to apply for a long-term residence permit and you will need to prove that you have sufficient resources and a comprehensive sickness insurance cover to stay. This will allow you to reside in another EU Member State.

However, due to the sanitary crises, the opening of the online application initially planned on 1 July 2020, has been postponed to 1 October 2020. And regarding this issue, all relevant information will be available as soon as the definitive scenario will be known including the trade deal results.

Trump’s Tweets are not Specific Orders, but rather Personal Sentiments